A fabulous new offer from Papermill......

Evening all,  thanks for popping back to checkout today's post.
There is a fab new offer this week from
PAPERMILL
A4 Buckram Embossed Black Card 270gsm
20 sheets for £5.00
This card has a lovely embossed texture, and is a lovely to work with....here are my Papermill DT cards for this 'Guy Fawkes' offer... 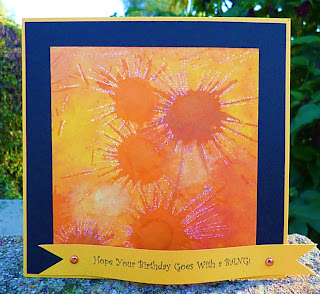 All cardstock from
PAPERMILL
This card was inked with Colour Chemistry from
OAK HOUSE STUDIO , splodged with Tim Holtz Distress Stain and covered with lashings of Glamourdust ;-) 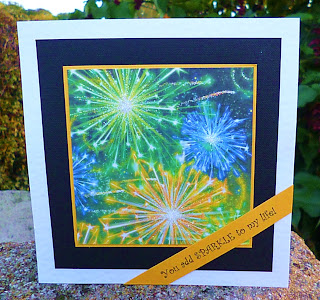 Although the 'buckram' cardstock looks navy on these pics, it is most definitely BLACK! (think it was just the strange daylight, as I was snapping.)
I made this card for Alan....gave it to him....then said, I've paid for a load of craft stuff on YOUR bankcard, darling!! hahaha

Well, hope you like them,
Catch you all soon with my DT cards for the new Lavinia challenge, which starts on Friday
xx
Posted by Barbara at 10:00 pm 23 comments:

Hi everyone, I'm back today with a cute little project that would maybe entertain the kids during half-term.

Santa Serviette Rings.
For 6 people you only need 3 x A4 sheets of Papermill cardstock (I used white hammered)

Fold an A4 sheet of cardstock in half.
Draw 1 shape for the serviette holder, fold the card then cut through both pieces to get 2 shapes.

Do your pencil marks on the reverse.

Now you need to cut a hole for the eyes.

Now you need (for 2 serviette rings)
4 googly eyes,
4 small circles of red. (I rushed mine so they're not very 'round'.... a 1/2" punch would be better)
2 pieces of pink cardstock roughly 1" x 2"
and
2 pieces of white cardstock, slightly smaller than the pink, and 'cut into' to make Santa's moustache.

Assemble the face, as shown. 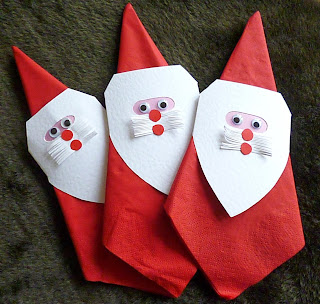 Now all you need to do is fold red serviettes into a point, and insert onto the holders.

Hope these instructions are clear enough to follow.
With care, you should be able to keep them for many years.


A much easier and less time-consuming serviette holder can be made in 5 minutes.

Cut as many circles as you want....1 for every holder needed.

Make a split in the circle about 1/3 down from the top. (If children are making these, you might need to help them with this part) 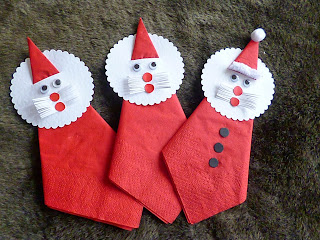 Assemble faces as previously shown.
I've decorated one a bit further with black 'buttons', a bobble and a piece of white pipe cleaner around the hat.
Well that's it for today, apologies for the long post, hope you're all still awake!
Enjoy half-term ;-)
Barbara xx
Posted by Barbara at 12:00 pm 16 comments:

Evening everyone, I'm back after a week of non-blogging....why is everything so manic at the moment for me (answers on a postcard, please)
Anyway, some of you may know that Lynnda Worsnop of Oak House Studio holds a ONE STAMP EVENT 2 or 3 times a year, when the DT and studio visitors make as many projects as possible, with only ONE stamp...This time, on the 22nd September, it was the beautiful Poinsettia stamp.
I wasn't able to attend the studios, due to being on holiday, but I made a few cards with the stamp.
Hope you like them.... 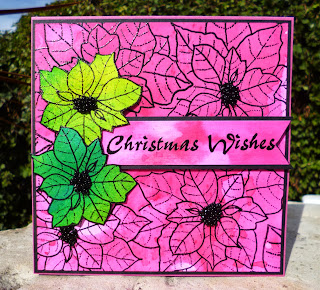 All cardstock is from
PAPERMILL
thought I'd go a bit 'in ya face' with this one.
Inks from
OAK HOUSE STUDIO 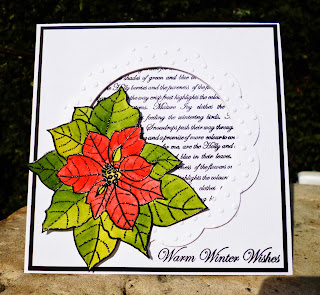 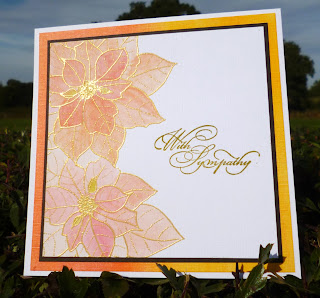 The poinsettia has been heat embossed with OHS gold 'fine detail' embossing powder.
I have coloured the image with red & orange ink, and an aqua-brush....really watered down in places.


Well, that's it for tonight,  hope you've enjoyed looking.
Why not pop over to Oak House Studio, and checkout all the fabulous stamps, inks and ep's....?
I'm going to leave you with a couple of new pics of
our beautiful little Eva, love her to bits xx 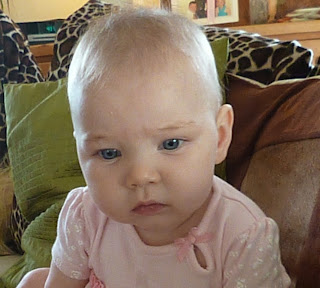 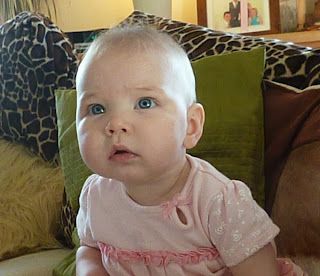 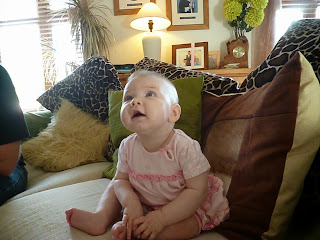 Morning all, hope you're staying cosy and warm....
.I'm home today and tomorrow, so I'm trying to get loads of crafting done for another Craft Fair on Saturday...... phew, it's all 'go' at the moment.
I've got a couple more DT card to show you using this weeks Special Offer from
PAPERMILL (click on this link to go directly to the offer) 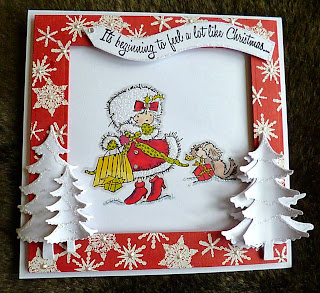 All cardstock from
PAPERMILL
Sentiment was free, from a magazine.....Lili of the Valley image, coloured with promarkers.... die-cut trees from Crafters Companion and a small set of snowflakes that I've had forever! (don't know the company, sorry) 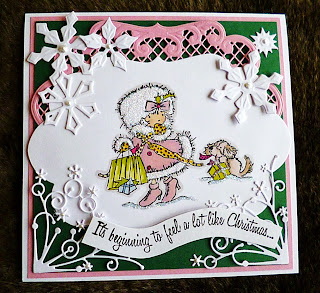 Same image, coloured pink..... a Memory Box corner die....the lattice central die is from Marianne, and the snowflakes are Spellbinders. Same sentiment as above. I've used the forest green cardstock from the special offer and pink.
Loads of Glamourdust too.....
Hope you like them....
Catch you all soon
xx

Evening all, I'm a bit late with this blog post, but better late than never, I suppose.
I've done a 2-day craft fair this weekend at the little medieval village of Lacock (where all the BBC period drama's are set).....sold almost £180 of cards so I have a big smile on me mush tonight. Only problem is, I have another fair next Saturday, so I'm gonna have to get busy over the next few days, replacing my stock!
Anyway, some of the cards sold this weekend were my DT cards for
PAPERMILL
......their new 'Special' this week can be found
HERE
20 A4 sheets of Forest Green 160gsm and 20 A4 sheets of Post Box Red 160gsm all for just £5.00
These are my cards..... 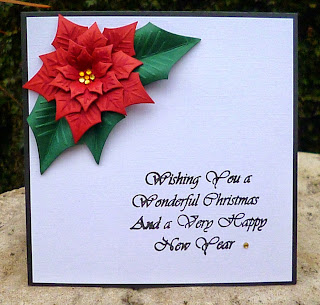 Spellbinders Poinsettia dies, and a sentiment from Dimension 4th.....All cardstock from Papermill. 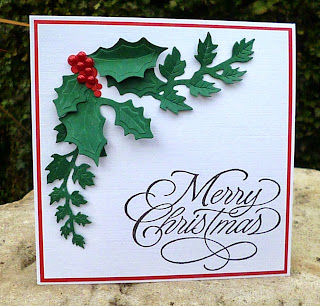 Sentiment from Inkylicious and holly & ivy dies from Crafters Companion. 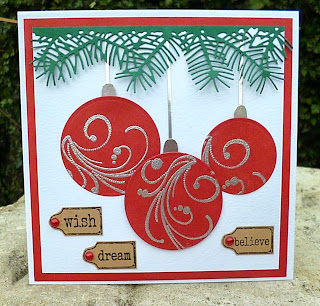 Pine branch die from Memory Box, Spellbinders classic circles, stamped with flourishes from Inkadinkado and heat embossed with silver EP from OAK HOUSE STUDIO
The sentiment tags are by Lili of the Valley.

Well, that's it for today, hope you like them. Catch you all soon....
Barbara
xx

QKR Stampede
Stampin' for the Weekend
Posted by Barbara at 7:48 pm 20 comments:

Autumn is still around!

Hello everyone, and a big warm welcome to my new followers.....the fact that I'm freezing as I write doesn't matter. (LOL)
My goodness, where has the last week gone, I can't believe it's 9 days since I blogged......
Anyway, just wanted to show you my 2nd DT card for the Lavinia Stamps AUTUMN challenge
HERE
The fabulous designs are available from
LAVINIA STAMPS
So, this is my Autumn DT card.... Although I don't like Autumn, as I said in my last post....I do love the colours it brings, and I enjoy making Autumnal coloured cards.
I've used the lovely Pine Trees from Lavinia, a leafy mask, and a computer generated sentiment. Inks and ink sprays are from
OAK HOUSE STUDIO
(Great choice of colours and cover really well)
All cardstock is from
PAPERMILL
as usual .....

This is such a handy little stamp. I've just made a batch of Christmas cards with it....nice and easy, just how I like Christmas cards.
Don't forget to enter the Lavinia Challenge, the prize is a mahoooooosive £40 to spend on their website.

Hi everyone........well Autumn certainly seems to be here, with  leaves turning many colours and falling. I've got to admit, I'm not too keen on the Autumn season, 'cos although I LOVE the colours, I can't help thinking the changing colours only signify DEATH......death of Summer, death of all the gorgeous plants and flowers.....and the migrating birds leave us for warmer climes. Also, my lovely mam  passed away on 6th October, so all in all, I just feel sad, sad, sad! (Sorry)
Anyway, now that I've depressed you all, I'll move onto something NICE.....it's Challenge No.9 at
LAVINIA STAMPS
The theme is AUTUMN and the prize is a WHOPPING £40 to spend at Lavinia Stamps.
Here is one of my DT cards....I'll show another tomorrow.

I heat embossed the tree, fairy and the overhanging foliage onto plain brown cardstock from
PAPERMILL
The rest of the card started off as smooth white, also from
Papermill, of course ;-) 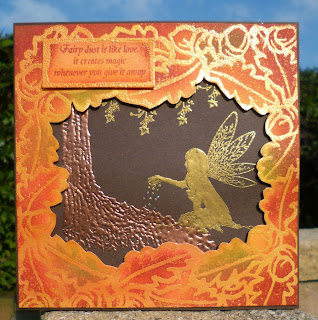 The oak leaf frame is done with a mask from Ali Reeves, using gold embossing powder from
Oak House Studio
I then inked with pigment inks in various colours, also from OHS

I love this little sentiment......all stamps are from Lavinia Stamps....
HERE

Hope you like this card.....would love you to leave a comment if you've enjoyed looking.
Catch you all tomorrow,
Barbara
xx
Posted by Barbara at 10:39 am 31 comments:

Barbara
Chippenham, Wiltshire (but originally from Durham ), United Kingdom
I have been crafting all of my life....well, since I was 4 years old. I love days when I can get out of bed, not bother with make-up, or housework and go straight into my craft room. I live in a beautiful part of England, just outside of the 'World Heritage' city of Bath, with my OH, Alan and our German Shepherd, Finn. I have 2 wonderful grown-up sons, Nick and Adam, 1 gorgeous daughter-in-law Emma and 3 fantastic grandchildren. The rest of my family still live 'Up North', and although I miss them, we see each other as often as possible. I still consider myself very, very lucky indeed.